Although vortex is ubiquitous in nature, it is difficult to give a rigorous definition. Helmholtz proposed the concept of “Vortex Filament” in 1858. There are still many textbooks that define vortex as Vorticity Tube. Vorticity magnitude is defined as the strength of the vortex, or the strength of the rotation. It can be clearly seen that in the definition of Helmholtz, the natural phenomenon of fluid rotation (Vortex) and vorticity which is a mathematical definition have been completely equalized, and this confusion has continued to the present with the terms of vortex/vorticity line, vortex/vorticity filament and vortex/vorticity tube. This misunderstanding is challenged as “vortex and vorticity are not well distinguished”.

1. Liutex is born for vortex

In 2017, Professor Chaoqun Liu of the University of Texas at Arlington (UTA) proposed a new physical quantity, Liutex, that represents the fluid rotation or vortex. The main idea is to extract the rigid rotation part out from the fluid motion by using a so-called UTA R-NR decomposition to decompose the velocity gradient tensor into a rotational part R and a non-rotational part NR. It defines the real eigenvector direction of the velocity gradient tensor as the direction of Liutex and twice the rotational angular velocity as the magnitude of Liutex, as shown in Figure 1.

Xu fully believes that Liutex does lift and uncover the mask covering vortex which has puzzled our science community for so many centuries. Specifically, the Liutex core-lines limpidly bring out the skeleton of vortex structures and for the first time, vividly exhibit these structures to our visual world, which, from Xu’s experience, is so far the unique representation of vortical structures with the true, only true, nothing else but the true mathematical essences of vortex physics in entirety.

The Liutex method correctly decomposes the velocity gradient tensor into a rotating part and a non-rotating part, instead of a symmetrical and anti-symmetric parts. There has never been a purely rotating tensor before.

After Liutex was discovered, the team at the University of Texas at Arlington have developed a series of vortex identification methods based on Liutex. Many studies have demonstrated that Liutex core line method can correctly display vortex structures in different flow fields. The programs of these methods can be downloaded for free from the UTA’s website, and everyone is welcome to download, try and use them broadly.

In fact, vorticity is not only rotation, but rotation plus shear. For solids, the shear is zero or very small, so the vorticity can represent rotation. However, the shear of fluid cannot be ignored, which is a main reason why the vorticity cannot represent the fluid rotation or vortex. Based on the above understanding, Professor Chaoqun Liu proposed the RS decomposition of vorticity. Namely, it is to decompose the vorticity into a rotating part and a shearing part. These theories described above constitute the Liutex theoretical system, which pave the foundation for the new era of vortex science, turbulence research and fluid mechanics.

The first-generation vortex identification method is based on the vorticity tube, vorticity filament, etc., which is constructed based on the concept of vorticity. However, for parallel shear flow which has no fluid rotation or vortex, there is strong vorticity. Therefore, it is not reliable to detect vortex by vorticity. The second-generation vortex identification methods are based on the eigenvalues ​​of the velocity gradient tensor and related invariants, such as Q, Δ, λ2, and λci. Most of these methods are scalars, thus the information about the direction of the rotation axis is lost. Therefore, only the vortex strength can be qualitatively obtained without the quantity of the angular velocity. For the iso-surface which is the only way can be used to express vortex structure for scalars, the threshold value needs to be artificially adjusted which is some kind arbitrary. In addition, there is also a problem with the wrong order of the dimension. The third generation of vortex identification methods is based on the Liutex. This method does not need to set a threshold. It can not only display the direction of the rotation axis, but also can capture both strong and weak vortices.

After Liutex was proposed, Prof. Liu and his students found that the Liutex (rigid body rotation) spectrum has a -5/3 similarity law in the turbulent boundary layer when they studied an example of Liutex application of DNS for boundary layer transition.

Kolmogorov’s famous -5/3 similarity law is only valid in an inertial subrange of isotropic turbulence with very large Reynolds numbers. It does not fit well with DNS or experimental results in turbulent boundary layers in wall-bounded flows with small and medium Reynolds numbers. However, it can be seen from the Liutex spectrum that the -5/3 similarity law of Liutex agrees very well with DNS!

Fig. 3 The Liutex spectrum has a -5/3 similarity law in the turbulent boundary layer 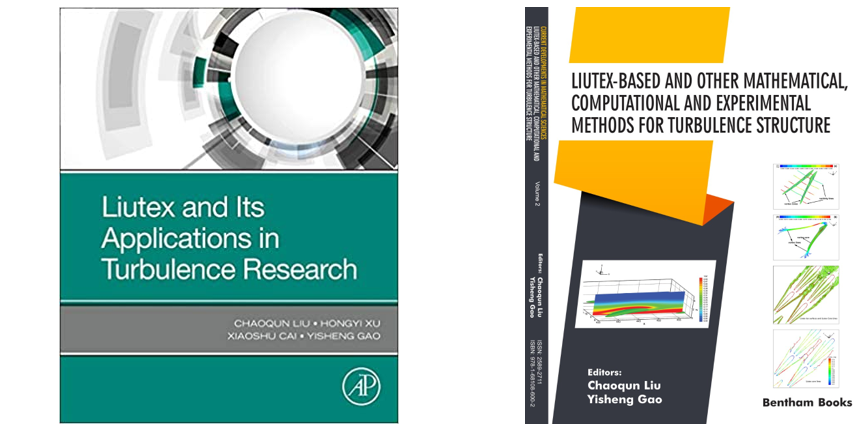 3. Cooperation of strong groups to clarify the century long fog of vortex and vorticity

Prof. Chaoqun Liu uses these six elements as the touchstone for judging various vortex identification methods. Professor Liu pointed out that the first-generation vortex identification method cannot answer any of the aforementioned six elements. The second-generation vortex identification methods cannot answer these elements either except for the approximate vortex boundary by an empirical threshold. So, what is the physical quantity that precisely represents vortex? Professor Chaoqun Liu gave his answer—Liutex. Liutex is a vector, whose magnitude is twice the rotation angular speed and direction is the direction of the local rotation axis. This answers questions (1) and (3); based on the concept of the density of Liutex in the fluid field, Liutex-Omega can be used to measure the relative vortex strength in (2) among the six elements; the center of the vortex itself is a special Liutex line, so the position of the vortex core in (4) can also be answered; through experience, the relative strength of the vortex core can be reduced to 95% to determine the size of the vortex core in (5) and the boundary of the vortex in (6); this method can capture both strong and weak vortices.

A series of studies have demonstrated that Liutex can extract the rigid rotating part from the fluid motion to avoid the contamination of shear. Liutex theory also explains the reason why vorticity is applicable to represent rotation in solids but not in fluids. The theory is that vorticity can be decomposed into the sum of rotation plus shear (this decomposition is called RS decomposition of vorticity). Shear in solids is very small, but the shear in the fluid cannot be ignored. New developments in Liutex theories and methods, such as Liutex vector line, Liutex iso-surface, Liutex-Omega method, Liutex vortex core line, principal coordinate system and Liutex-5/3 similarity law, etc., gradually form a matured Liutex theoretic system.

For an identical goal to develop vortex science and turbulence theory, Chaoqun Liu’s UTA ​​team and JHD promoted their strategic cooperation. The UTA team submitted their new innovative results to JHD in time as their preferred journal, and JHD actively organizes its power to give the priority to the UTA research papers and promotes them in the Springer platform. Only in 2018 and 2019, the UTA team published 12 papers in JHD. The third generation of vortex identification methods is popularized and applied in various fields of hydrodynamics to support and echo the research work of the UTA team. In addition, the JHD editorial board and Prof. Chaoqun Liu’s team have cooperated many times to hold various vortex and turbulence conferences and professionsl meetings to promote the development of Liutex research and increase its influence. Especially during the virus pandemic period in 2020, the Liutex Workshop of the 13th Chaos International Conference, was successfully held. The number of participants reached 35 and 40 papers were presented and discussed, counted as 1/3 of the entire conference participants. The collection of the Liutex Workshop papers was planned to be an edited book “Liutex and Third Generation of Vortex Definition and Identification for Turbulence Research” which is expected to be published by the Springer Nature.

Misunderstanding of vortex and vorticity has lasted for over a hundred years which is deeply rooted. It is of great significance to the development of natural science to correct the chaos and eliminate the fallacy. The two teams, UTA and JHD, have cooperated with each other and complemented each other with their strengths. They are going to clarify this long-lasted misunderstanding and work together to develop Liutex dynamics which is a new highland of scientific research.

a code the author used is available above.